For many years, I have been drooling for a helmet camera to take on my tours. So far on my travels, the video I've been taking has been by holding my point and shoot which isn't the safest for riding or for the camera. Having a camera attached to the trike is nice but I really wanted a camera on my helmet where the view is what I see as I ride. Checking for traffic looking right and left, pointing to the side of the road to something that catches my eye or zeroing-in on the road ahead because I need to concentrate for a big descent. Often, I don't have time to pull out the camera before something cool goes by. I think capturing the images and sounds of the road adds another interesting dimension to telling my story.

The biggest obstacle for me using a helmet cam was my head always bobbed side to side. Watching the resulting video made me feel seasick. That was a big disappointment and I had to put the helmet camera purchase to the side. That is, until recently, when I made some big changes to my trike fit and now my head doesn't bob. I'll describe these, very important, changes in another article. After riding trikes for 10 years, I'm still finding new things to improve my riding experience.

At this summer's Recumbent Retreat on the Oregon Coast, I had a few conversations with people using GoPros that convinced me using a helmet cam was a good idea. Everyone pointed out that helmet cameras are an effective safety device. If something should happen on the road, it's very helpful to have video showing your side of the story. Unfortunately, if there's a confrontation between a vehicle and a cyclist, authorities and insurance companies rarely believe the cyclist. We have all read news reports where a cyclist is maimed or even killed but there are little repercussions for the motorist. Personally, I've always thought the GoPro looked a bit ridiculous sticking out of the helmet. The cyclists I talked to assured me having the camera protruding so obviously was an advantage. When motorists see the camera they often change their behaviour. After these conversations I was sold on getting a camera.

Once I decided to get a video camera, I started to do research into what camera to buy. Everyone is familiar with the GoPro and I looked at those and many others before deciding on the Sony HDR-AS100V. There were 2 main deciding factors for this purchase. The first was I found the colors to be more natural out of the Sony than the GoPro. The GoPro has a pinkish tint that the Sony doesn't have. The Sony also has much better image stabilization. I think using a helmet cam means my body will reduce some of the shaking and riding a full suspension trike also helps reduce road vibration. The camera also has an optional wrist monitor where you can see what's being shot, start and stop the video, or simply take photos while leaving the camera on the helmet. It works with wifi and can operate 5 different cameras at once.

Once I started using the camera I needed time to get comfortable with it. I discovered that wind noise was an unwelcome issue particularly at speed and down hill. Wind noise can be distracting and very annoying. I wanted to find a way to reduce it while keeping the ambient sounds. First, I tried a thin piece of foam which helped but the wind noise was still distracting. This project became a collaboration with friends on Facebook. Some people posted that using goose down over the microphones was a cheap and easy solution.

My first attempt required opening up a goose down pillow. I used blue adhesive putty sticking it around the stereo mics. It was better but not perfect. I posted the resulting video to Facebook and someone replied that the putty needs to be applied very thinly like a piece of tape. I tried again smoothing out the putty and that did the trick with perfect results. No more wind noise!! Double stick tape will also work well. What I also noticed is I got better results using only goose down and not feathers. It doesn't take much down either. The only problem with using down is it can't get wet. I have a waterproof housing for the camera that I'll have to keep handy for when the air turns moist. 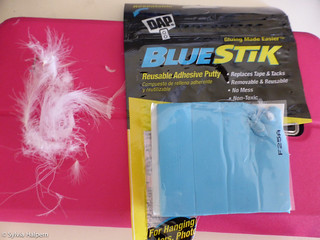 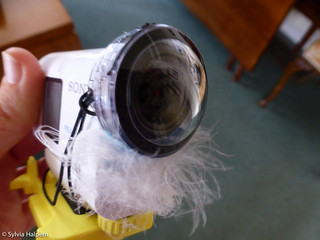 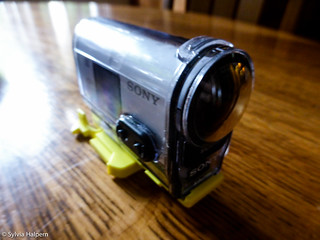 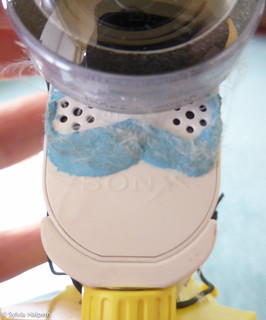 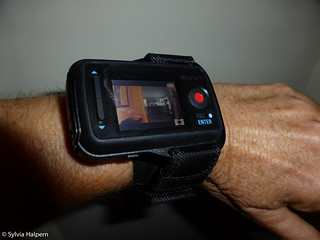 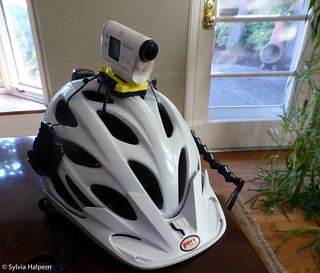