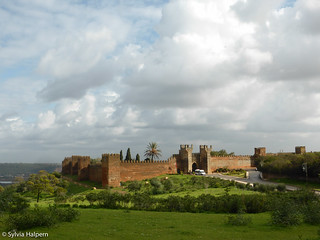 Today would be our second attempt at getting to Kenitra. Even though we rode 30 miles yesterday we really weren't any closer. Funny enough, yesterday's ride was more lateral than south. Martin suggested I get a head start and I was on the road by 9 am in bright sunshine. I decided to try using my bluff neck scarf as a mask to filter some of the deisel exhaust. Right away, I noticed that people weren't as enthusiastic in their greetings. Interesting. Having my mouth and nose covered changed the way people interacted with me. Maybe because they couldn't see me smiling? Although I enjoy interacting, the quieter ride was far more relaxing.

I was going to be on the National road all day. Once out of town the traffic thinned. I was riding in pasture land and there were lots of donkey pulled carts. It seemed the carts mostly used a dirt path along the side of the road. This path was very muddy and the poor donkeys struggled with their loads. I passed a cart that smelled really bad like it was carrying manure. I could hear the cart starting to gain on me and had to put more effort into the pedals to stay ahead. I liked that the cart was behind me slowing down traffic too. After a couple of miles the cart turned into a field and I could relax again.

At about 25 miles, Martin still hadn't shown up and I was feeling good about my pace. At 30 miles I started to wonder if he decided to stay another day in Souk El Arbaa Du Gharb. He pedaled up at 33 miles and we stopped to have lunch together. Once back on the road, we were passed by the French girls we first met in Larache. Wow are they strong. Funny enough, they passed us again in the next town where we stopped for tea. This is actually somewhat typical for me. Martin is a rare cyclist to put up with my slow speed but I often will see the same cyclists for many days when they pass me. The turtle can't compete for speed but I tend to do the same distance because there aren't that many places to stop for the night. 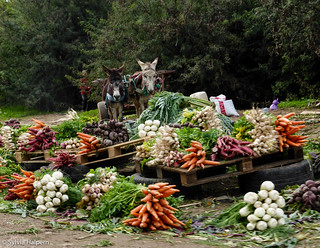 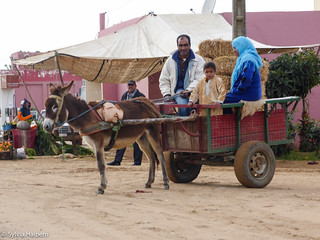 Eventually, we made it to Kenitra and found a cheap hotel where we shared a room. The room had a shower and a sink but the toilet was down the hall. The room was small and crowded with all the bags. The shower stall was also very small but the water was wonderfully hot. We went out for a nice simple meal and then called it an early night.

The next morning we got going earlier than usual for the straight forward ride into Rabat. It was another beautiful day and I actually got hot riding. I love the heat and this felt really good. As we approached Rabat, the traffic increased and I was a bit worried that traffic would get crazy but it never did. We found a bike/scooter path into the city next to the tram line. The path was very narrow and it was a bit precarious when the scooters passed. I don't think there are many bikers in Rabat using the paths. Martin was in front and saw a sign for the city center and took off the path into traffic. Again, there was a bike path that was mostly used by scooters. They all seemed surprised to be sharing the lane. We asked a traffic cop for directions and he made a special point of saying 'Welcome to Morocco' as we pushed off. Soon we were in the Medina and using Martin's Lonely Planet guide found a recommended cheap hotel. This one was on the second floor and had a spiral staircase entrance. I watched the bikes and Martin went inside. He thought the price was good ($20 with a bathroom down the hall) and there was a place for the bikes. A hot shower was an extra $1.

The front desk man was a really good sport helping Martin bring the trike up the spiral steps. When I first saw the steps I wondered how it would work but the guys took it slow and there was no problem. One of us stayed with the bags outside until everything was inside. This is a luxury I've never been afforded when traveling alone but no one has ever taken anything either. The room was good with three single beds, small table, 2 chairs and sink with cold water. I used the middle bed to put my stuff which made finding everything easier. The only window was above the door.

While we were moving everything up, I met a young Kiwi woman traveling with her daughter. They were in town for the soccer club world cup. New Zealand was still in the tournament and they had tickets. Later at dinner in the medina we met other people who were visiting from Great Britain and Australia for the tournament.

Our neighbors in the hotel were especially religious men. They shared a rug using it outside the room. Maybe they couldn't set it up inside their room and still point to Mecca. They prayed and chanted very loudly with the rug pointed at our door. With both of the them sharing the rug, the prayers took a long time. I felt like I was disturbing them by opening our door. Once I had to walk all the way around the courtyard to the shower so I didn't walk on the rug. I really don't know what the protocol is for getting around prayer rugs.

Martin and I walked all over the medina and the next day went to the ancient kasbah which has a terrific view of the ocean and neighboring Sale across a river. I was surprised to see so many surfers. It was a really beautiful day and I enjoyed walking in Rabat.

The next few days was dominated by rain. Martin and I went to the ancient ruins of Chellah which date back to the Phoenician times during a break in the weather. Rabat is a very nice city. There is enough to see to make it interesting and the vibe is quite relaxed. I didn't have any issues with aggressive sellers in the medina or anywhere else. We found wonderful very inexpensive food too. Mandarins are only 30 cents a kilo (2.2 lbs), large avocados are 70 cents and bananas are 90 cents a kilo. I found grilled lamb sandwiches for $1 with so much meat I made 2 sandwiches out of them.

My time with Martin is coming to an end. He needs to head to Fes where he will be meeting family for Christmas. I decided to stay longer in Rabat and move to a nicer hotel. Martin and I walked all over using Lonely Planet for recommendations but found all the hotels listed were full. A local guy (tout) took us around the corner to the Capitol Hotel which is a regular hotel with all the creature comforts for $33/night. This is about what I paid in Spain for a very basic room. It is next to the highly recommended Patisserie Mejestic. The hotel also has a good restaurant where I can get breakfast for $2. When I saw there was also strong wifi I was happy with this choice. The guy who escorted us there followed us out asking for $1.50. That was far too much but he didn't want to take the 60 cents I offered him acting like he was offended. When I started to walk away suddenly 60 cents was fine. He really only took us half a block and we would have found the place without him.

The next morning, I got packed up and Martin decided to stay another day since the forecast was still calling for rain. After he moved to a single room we walked over to the Capitol Hotel so I could get settled. The front desk guy was so mellow. He didn't even blink an eye at what to do with Myrtle. First, he wanted to take her up in the elevator to my room. I told him that wasn't necessary and he rolled her down the hall behind the front desk.

I have lots of things I want to take care of in Rabat. I'm feeling a bit overwhelmed with a growing list of things to do such as, find a face mask, get alcohol for my stove, buy and mail postcards and find a paper map. I took care of a few of things with Martin which was fun. With his French language skills, he helped me find a good map, alcohol and an electric hot water immersion coil. I've been wanting one of these for awhile and we found it in the medina as well as an adapter plug. It will be nice not having to use the stove to make tea in hotel rooms.

I also really enjoyed riding with Martin and hope to see him again. He will also be heading south after the new year. He was so nice, patient and agreeable. I also enjoyed hearing his stories of cycling all over the world for the last 30 years.

I checked into the Capitol Hotel for 3 nights and it could take longer to get my blog up to date and photos uploaded. So much to do.... 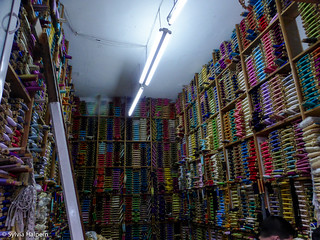 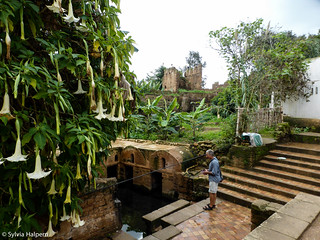 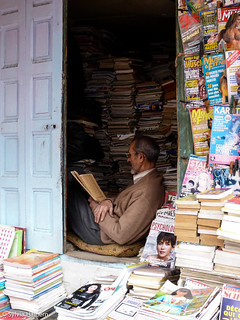 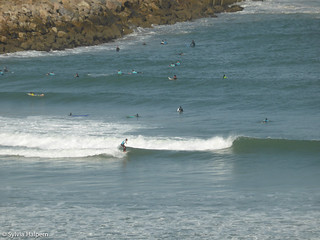 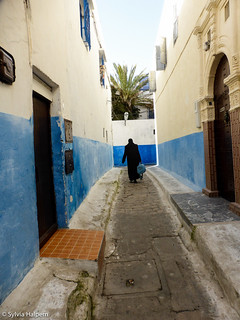 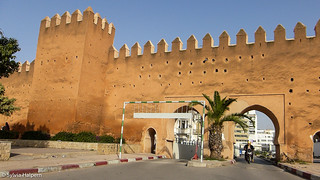 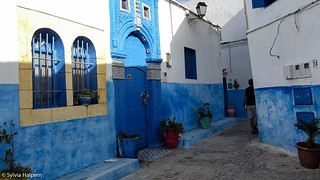 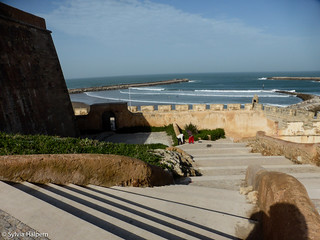