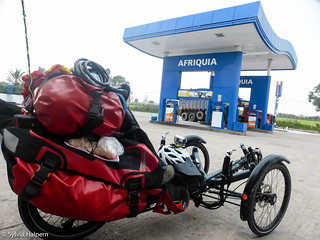 I had fun in the morning yakking with some travellers at the youth hostel including the French cyclist, Daniel. He needed to stay in Casablanca to see a dentist. I would be really surprised not to see him again. I got packed and on the road after 10 and started riding under overcast skies. I went out the coast road passed the impressive Hassan II Mosque. I got a bit turned around at one point and some kids pointed me in the right direction. I really didn't have a destination in mind for the day. The next big city is El Jadida which is a bit of a push, miles wise, for me to do in one day. Since this is the coast, I figured there must be lots of beach communities with tourist hotels along the way.

There is a lot of development going on south of Casablanca. Big condo communities are going up and none of them are finished. No stores or services just housing. Something about all this building didn't feel right to me. It smelled like a Wall Street speculation scam where the people of Morocco will end up holding an empty bag. Mile after mile of construction and not one hotel. All these empty buildings looked like a great place to camp. There are security guards at all the developments and I didn't feel comfortable putting a guy's job at risk or being kicked out when discovered.

For some reason, I really wanted to try camping today. I rode passed a sign for a campground and decided to follow that. I had only gone about 20 miles but if the campground was nice I could stop early. 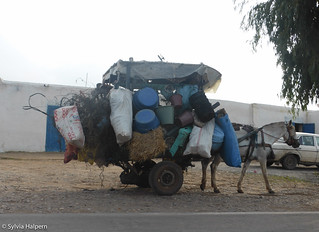 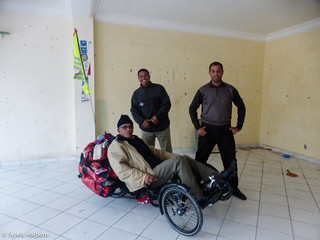 The road to the campground was unpaved and potholed but I was able to ride it. I went about a mile toward the ocean and found the gate to the entrance. The campground didn't appear to be open. A kid showed up and he pounded on the metal door until a guy answered. It was open but doesn't have showers and no-one else was staying there. This all seemed very odd and I thanked the guy riding back to the highway. Then a guy in a car stopped me to take a picture and he spoke English. He said there is a hotel in the next town but I never saw it. At the next town I pulled into a municipal office building. I've heard and read that the police stations or municipal services people will always take care of travelers in Morocco. I'm not really sure what the offices were for but I found a group of guys to help me. They said I could camp behind the building if I wanted. It was only 2:30 and couldn't imagine what I would do in this town for the rest of the afternoon so I kept riding.

At about 3:30 I decided to try camping at a gas station. I did this a few times in Mexico and the gas stations in Morocco look a lot better. In Morocco, the stations are like strip malls. There is gas, mechanic bays, car wash, general store, barber, cafe, a prayer room and, sometimes, an actual mosque. I like the idea of camping where there are people around. To me, it's much scarier to try and hide myself away in the darkness and then get discovered by some weirdo. I pulled into an Afriquia station that had all the usual services. There would be a bathroom, food, electricity and, hopefully, and quieter place to pitch the tent. The owner didn't hesitate at all to let me stay. He looked at me and the trike and then showed me a covered patio behind the cafe down some stairs that is surrounded by grass. It looked like an area used for events. This was great. There was also a tiled patio right next to the cafe and I decided to park there so I wouldn't have to get the trike down and then back up the stairs in the morning.

Across the parking lot there was an open store front that had electrical outlets. I plugged in my gps and phone and then went into the cafe to have some tea. A half hour later the owner came in and said I could move into an store front that had a door. I moved the trike and my gear over. The owner's brother and dad were there too. I let them try the trike and they loved it. Then the owner's little 4 year old daughter came in and we all pushed her around in the trike while she laughed and laughed. They were all very gracious but I had the feeling they didn't really understand what I was doing there. I took some video which everyone loved. Later, the owner gave me the key to the store front so I could lock myself in overnight.

I slept well, returned the key and thanked the owner before pushing off in the morning. I also got his address so I can send a postcard from somewhere along my tour. I couldn't have asked for a nicer experience to try camping on my own in Morocco. I don't know if this is something I'll be looking to do regularly but it is nice to know the option is there if I need it.

It was a very nice morning. There were a few hills coming into Azemmour which is a very dusty, busy crossroads town. Lonely Planet lists it as a place to visit so there must be more but I didn't take the time to explore. At some point, I pulled over to rest my feet, eat a snack and get my ipod out. I'm still trying to learn Spanish and I like listening to the lessons while I ride. Next thing I know a young kid is handing me a glass of hot mint tea. Where did he come from? I look up and there are guys working on a building adding a roof top patio. The kid also offers me some bread but I was already eating bread. Then his dad comes out and, in a very rough manner, tells him to get me a chair. I say that isn't necessary since I'm already sitting in a chair. I finish my tea and the kid pours me another small glass while his dad is yelling at him. The guys working are all staring down at me and I smile back. Then the dad pulls out a hash pipe and starts smoking. I hand the kid back the glass thanking him. The dad wants me to come over to him but I turn the trike to the road saying 'I got to go'. That was a nice and also very strange encounter that left me feeling a little creeped out. I really felt sorry for the kid.

Coming into El Jadida I met a young cyclist out for a day ride. I fully expected he would pass me but he kept riding with me. He was on a carbon fiber Bianchi wearing a full kit. With some effort I could keep up a good pace on the flats and get some distance on the descents. Uphills are at turtle pace. This cyclist reaches behind my seat and pushes me up the hill while he is riding. I don't think anyone has ever done this before. Where has this guy been all these years? He rode with me all the way into town. He didn't speak English but asked if I wanted to stay at a hotel. First, we checked the Ibis. They wanted $90 which is crazy money to spend in Morocco. Then he took me to a Moroccan 3-star and I got checked in for $24.

My new friend, Ayad, helped me get the bags to the room and the trike locked up. Then he went home to change and returned a couple of hours later to show me the town. What a sweet kid. He is only 19 years old and I can't imagine I would have wanted to hang out with an old woman at his age. We walked through the fishing port, historic citi portuguese and the medina. El Jadida is a really nice town and I thoroughly enjoyed Ayad's company. He helped me negotiate prices for fruit, veggies and bread before walking me back to the hotel. He asked me if I needed anything. With the help of the translator on my tablet, I tell him I'd like to find a good bike shop to get my derailleur adjusted. No problem, he suggests we meet the next day in the hotel lobby.

The next day, at 3:00, Ayad shows up to take me to the bike shop. First we ride to his families home. His mom takes Myrtle for a spin and his sister serves us tea. They invite me back for dinner later in the evening. Then we go to the bike shop. The mechanic, Mohammed, has been a very serious racer winning tours all over Africa including the grand champion of Africa. It was all very impressive. Before taking care of the trike, we looked at pictures from his career and went to a cafe for coffee.

Mohammed took Myrtle for a spin and returned with a huge grin on his face. He loved it. Then he started going over everything and right away noticed that the bolt holding the left front wheel on the trike was missing. Missing! It had fallen off somewhere on the road and I didn't even notice. I had no idea. Crazy!! He found a bolt to fit and then adjusted the derailleur, lubed all connecting joints and pumped up the tires. I gave him $10 and he seemed very happy with that. I hope it was enough. Again, I got his address so I can send him a postcard. It was a really fun experience in that shop. Mohammed is also a coach and has a number of young guys helping him in the shop. He seems to be a really good role model for these kids including Ayad.

Ayad and I hung out for a couple of hours before dinner with his family. It is a very different experience to be with someone where there is no common language. Ayad was having a great time. I also enjoyed his company but found it all to be quite exhausting. Dinner was at 9 which about the time I start to fade. His sister made a really nice meal for the seven of us eating. Her boyfriend is French and, luckily, also speaks English. This was a huge relief for me and he was a great sport about playing translator. It was a lovely evening. Ayad and his family have been amazing and I can hardly believe my good fortune to have met them all.

I'll stay in El Jadida a couple of more days. My room has a bathtub and I'm going to take the time to wash my tent and air mat. It's possible I set up the tent in an area that dogs had used when I last camped in a campground. Everything has a funky smell I hope will clean off.

Then I want to figure out a route to Marrakesh. I'm still undecided if I should ride from El Jadida or from the next coastal town of Safi. 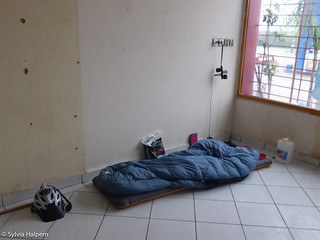 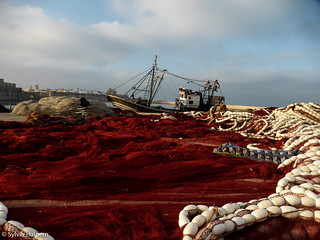 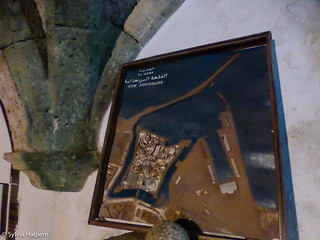 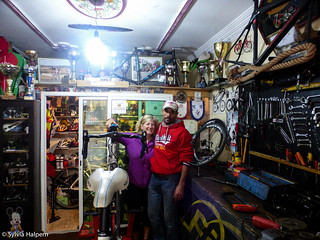 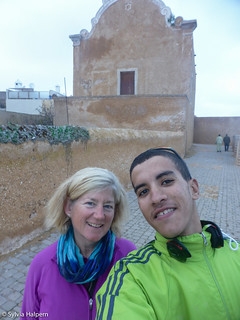 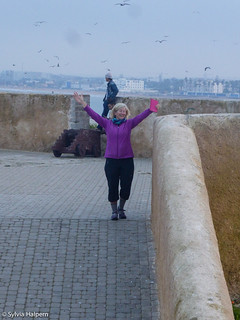 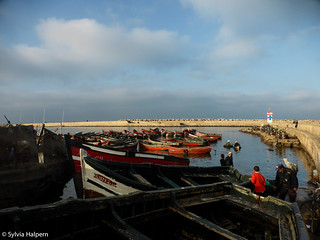 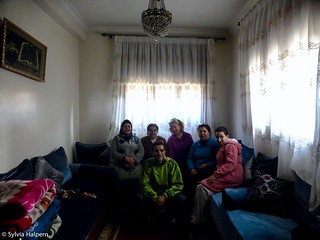